They say you should never meet your heroes, but there are some opportunities you can’t refuse: like interviewing the REAL Father Christmas. 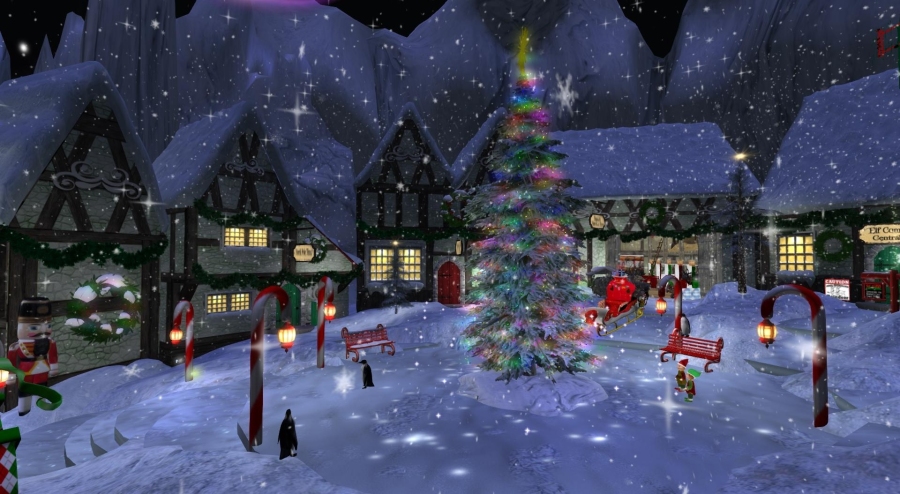 I’m led by an elf (whose name I didn’t catch – could it have been ‘Squeaky’?) through the vast workshop complex here at the (rather chilly) North Pole. ‘Impressive’ doesn’t begin to describe Santa’s HQ, candy-striped elves fill every nook and cranny doing anything from painting rocking horses to soldering tablet computers (I make a mental note to consult an elf next time my laptop plays up. Although I’m not exactly sure how I’d get hold of one, they don’t use social media ‘It’s bad for your elf’ says one rather smug fellow).

Lovely as the complex is, I can’t ignore the strange smell in the air. Eventually I bring it up and I’m informed the sickly odour is emanating from Santa’s reindeer: “They stink,” says my nameless guide. I must say, I’m relieved it’s the deer and not Santa with the issue – discovering that Father Christmas has a record-breaking case of B.O. would have been too much to bear. Feeling slightly nauseous due to the stink from Santa’s flying friends, I’m glad of the distraction when we finally arrive at Santa’s office. Face to face with the man himself, I can’t help but smile as he welcomes me with his trademarked cheeriness.

“It’s our busiest time of year, of course. It’s tiring,” says Santa, opening a can of a popular fizzy drink. “Caffeine helps,” he says between slurps. “I used to drink full-fat, but frankly it was having an effect on the old waistline.” Santa slaps his tummy, which I can confirm does indeed wobble link a bowl full of jelly. “No, it’s diet drinks for me now. Probably not the best for you, but at least they mean I can fit down the chimneys… or most chimneys at least!”

As Santa drains his second can of fizzy pop, I find myself looking around the room: my eyes are drawn to a large filing cabinet labelled: ‘The Naughty List’ and an electronic map of the planet – half is in darkness and labelled ‘Sleeping’, while the rest is brighter and marked ‘Awake’. Santa opens another soda, then looks at his watch. “I’m a very busy man,” he says (in a less jolly tone), so I apologise and begin.

First up, how preparations are going for Christmas? “We’re almost on schedule. Almost.” says Santa, with a grimace. “I’ve had to draft in even more elves this year, but I’m sure we’ll be ready by the big night, we always are. We do have magic on our side, after all.” I’d forgotten about magic. It must be useful when you have to hit a deadline? “Very,” he agrees, “Paul Daniels has nothing on me.” I quietly point out that Mister Daniels is no longer with us – Santa’s cheeks redden, and he makes a quick note (via a smart speaker) to update his cultural reference. I change the subject. Have the children of the world been good this year? Father Christmas’s face crumples into a smile. “Most of them, as usual. There’ll always be the naughty ones, of course, but I keep my eye on them.” I don’t doubt it. What’s Santa’s message to the naughty kids? “Be good for goodness sake!” is his swift reply, followed by bellowing laughter. It is, it seems, that simple. It’s at this point that Santa begins to show off what is a hugely impressive memory. He begins to go into detail about all the naughty activities I got up to as a child. I won’t dwell on them here, safe to say we both now see the funny side of certain events, softened by the passing of time – her hair DID grow back (mostly).

What about the big night? How does Father Christmas manage to visit every child on Earth in so little time? He gives a knowing wink. “That’s what you might call a ‘trade secret’.” Can he give us a clue? “Well,” he says, stroking his beard, “you know when you’re watching an episode of In The Night Garden and it seems to go on for an eternity… well Christmas Eve works something like that.” To be honest, I’m not any clearer, but I decide to move on.

Santa is looking a little slimmer than I expected. It can’t all have been the affect of the aspartame. Has he been on a diet? “Mrs Claus,” Santa says, with a sigh, “is very health conscious. It’s been ‘couscous’ this and ‘whole-grain’ that, not to mention bloomin’ ‘superfoods’ here there and everywhere. There’s very little difference between my food and what the reindeers eat!”

It seems the usual toys are as popular as ever. “Bikes, computers, games consoles, teddies, we’re doing them all this year. But only for the good kids.” What about the naughty children? “I’m experimenting this year – leaving them a photo of the gift they asked for.” He leans forward and speaks in hushed tones: “If they’ve been really bad, I leave them something battery powered. Something that relies on batteries that were discontinued years ago. Nothing says naughty like a silent gadget on Christmas afternoon…” Isn’t that a little harsh? Then I notice there’s a twinkle in Santa’s eye, that makes me wonder if he’s being totally serious.

Santa looks at his watch again and jumps from his seat. It would seem our time together has coming to an end. How are the reindeer? “Smelly!” says Santa. “Imagine riding on a sleigh, downwind of so many creatures on a high-fibre diet.” Not quite the answer I expected.

If he could have any gift this Christmas, what would it be, other than diet soda? Santa laughs. “People expect me to say ‘World peace’ or something like that. Which, of course, would be lovely. Personally, outside of all that, I’d love a 90 inch flat screen TV, if Mrs Claus is listening.”

As I’m ushered back into the workshop, Santa has one last thing to say to me: “I’m pleased you’ve been a good boy this year. Keep it up and you might get what you asked for.” I thank Santa and am guided back to reception by the elf from before. As ‘Squeaky’ (or whatever his name is), babbles about a new bio-gas project to convert reindeer guff into energy, I can’t help wondering how Santa will fit a garden shed onto his sleigh.

Have a magical Christmas.

The Out Of Depth Dad

Published by The Out of Depth Dad

A new dad, completely out of his depth. Who knew that parenthood was so tricky? View more posts

8 thoughts on “SANTA CLAUS STOPS WORK FOR A (QUICK) CHAT”

This site uses Akismet to reduce spam. Learn how your comment data is processed.