It’s the most wonderful time of the year, that’s what they say.

This may be true, but let’s not forget that Christmas can also be the most confusing time of the year, especially for a child.

Think of a word, any word. Now say it over to yourself 50 times.

After a while you stop hearing the word… rather you notice the sounds that make it up. Soon you’ve lost any sense of meaning and you’re left with syllables devoid of any connotation.

So it is with Christmas. There are many aspects of our yuletide celebrations so familiar to us that we just don’t see or hear them anymore. They’ve become rituals that we no longer look at objectively.

For example, we’ve lost any sense of the strangeness of Christmas trees. Cutting down a tree, bringing it inside, covering it in lights and watching it wither is seen as a normal and wholly festive activity. The only downside of this process that most of us admit to is the frustration of having to vacuum up the needles the unfortunate flora sheds onto the Axminster during its tinsel-laden death throws.

Then there’s Christmas Crackers. We all love pulling a cracker at this time of year – stop it, your mind’s in the gutter. We yank on a device which rarely ‘cracks’ in order to win a cheap toy that nobody wants, a hat that doesn’t fit your head and a joke that isn’t funny. Yet somehow, the whole is greater than the sum of the cracker’s lamentable parts and most wouldn’t dream of being without these festive damp-squibs.

Father Christmas, for me is the oddest of these traditions. I was one of those children that could drive a parent insane with my questions. As soon as I discovered the word ‘Why?’ I never stopped using it. My mother and father must have had the patience of saints.

I distinctly remember ‘buying in’ to the whole ‘he knows if you’ve been bad or good, so be good for goodness sake’ element of the Santa story. As a parent myself I can see how useful this particular warning is. Kids are on their best behaviour, because they know that if they’re not, Santa won’t visit. Hence a world full of well-behaved kids – bribed by the expectation of a cash of toys – brilliant stuff. 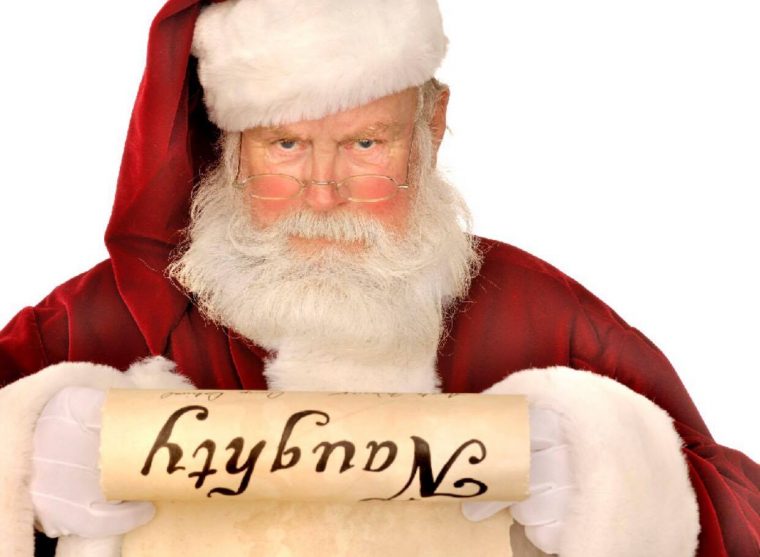 My problem, as a seven year old, was I didn’t live in a vacuum: I had friends. These friends, like me, were also going to be visited by Santa. Yet some friends had higher expectations of what they could expect from St Nick than I did. I vividly remember setting about to write to Father Christmas, asking for a He-man ‘Castle Greyskull’, only to be stopped in my tracks. Our chubby benefactor would never stretch to such a costly gift, I was informed. Fair enough, I thought and asked for a cheaper option. So imagine my shock when I discovered that friends of mine had received ‘Castle Greyskull’ from Santa. Where had I gone wrong? I’d followed the rules laid out in the song – yet it seemed there was no uniform equality in what we could expect to receive.

At the time I demanded to know why Santa had been so cruel. I remember asking my grandmother, who, stuck in a no win situation, offered the idea that my friend had been more of a ‘good boy’ this year than me. It was the only plausible solution to a system that pertains to be based around morality. I took the answer on the chin and decided to be ‘better’ next year.

In my young mind, I started to correlate two unrelated factors. Kids who received a lot at Christmas were, logic dictated, ‘better’, meaning more pious than the rest of us. They ‘deserved it’. Clearly I had no inkling of the relative wealth of their parents to mine – and frankly what difference would that make in a system where Santa provided gifts for all?

I remember struggling when I saw some of my peers being extremely naughty at school, yet still be rewarded by St Nick when Christmas came around. Was his detection equipment faulty?

Finally, the revelation of the truth about Santa Claus was delivered by my parents and (unlike most) I found myself relieved. The flaw in the story had really disturbed my young mind. I’d begun to feel Santa wasn’t a good judge of character – with his insistence on disproportionately lauding the virtues of the wealthy, who never, it seemed, went anywhere near the ‘Naughty List’.

Learning the truth taught me that Christmas was just like the rest of life. The rich were no ‘better’ than the poor – they just had more money. A valuable life lesson, I’m sure you’d agree. I’m not sure what answer I’ll when my son inquires why other kids get more (or less) than him from Santa at Christmas. What I do know is the solution I give will be nothing to do with being ‘good’.

The Out of Depth Dad

Published by The Out of Depth Dad

A new dad, completely out of his depth. Who knew that parenthood was so tricky? View more posts

This site uses Akismet to reduce spam. Learn how your comment data is processed.